William Hill, a part of Caesars Entertainment, and Monumental Sports & Entertainment announced a groundbreaking partnership deal in October 2019 to open the first-of-its-kind, marquee destination for local, regional and global visitors. With the addition of Michelin-starred Chef and Maryland native Nicholas Stefanelli, the talents of three leading purveyors in the hospitality and entertainment industries will offer guests a truly unique and extraordinary experience.

The two-story, 18,000 square-foot venue features 17 betting windows and 12 self-service betting kiosks, as well as Verizon 5G Wi-Fi capability so fans can place wagers on mobile devices through the William Hill app from the comfort of their seats as they enjoy a meal or beverage. Visitors will enjoy a premium game-day experience whether they’re attending a Capitals or Wizards game or watching out-of-town games in the sportsbook, thanks to an inspired sports-bar menu crafted by Stefanelli. 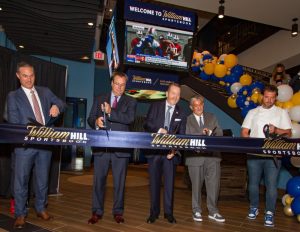 More than 100 television screens adorn the Sportsbook, including four positioned on all sides of a jumbotron that hangs from the ceiling in the center of the venue that is a replica of the one inside Capital One Arena at center ice/center court. A custom, 1,500 square-foot LED screen wraps the entire facility and offers visitors the best viewing experience for enjoying multiple games across various sports simultaneously.

There is also a broadcast studio that will be used to host live television and radio shows, as well as two VIP areas and a private dining and entertainment space. Design elements pay homage to the history of sports and local professional teams, including baseball stitching incorporated into the staircase railing, vintage lockers featured in the main bar, local sports memorabilia throughout the space and sketches of local arenas printed on the ceiling.

The sportsbook and restaurant will be open daily, year-round, and are accessible to the public from F Street while offering direct access to and from Capital One Arena during select ticketed events, which currently number 230 events a year and welcomes 3 million visitors.

The premier full-service food and beverage offerings created by Stefanelli complement the premium sports betting facilities that are synonymous with the William Hill experience. With its location within the spirited and energetic atmosphere of Capital One Arena, the William Hill Sportsbook and Restaurant Concept offers a revolutionary and fundamental fan experience for sports fans in Washington, D.C.

Stefanelli is known for his traditionally inspired Italian dishes mixed with equal parts finesse, flavor and whimsy style at his flagship Michelin-starred restaurant Masseria, as well as Officina at the Wharf and Georgetown.